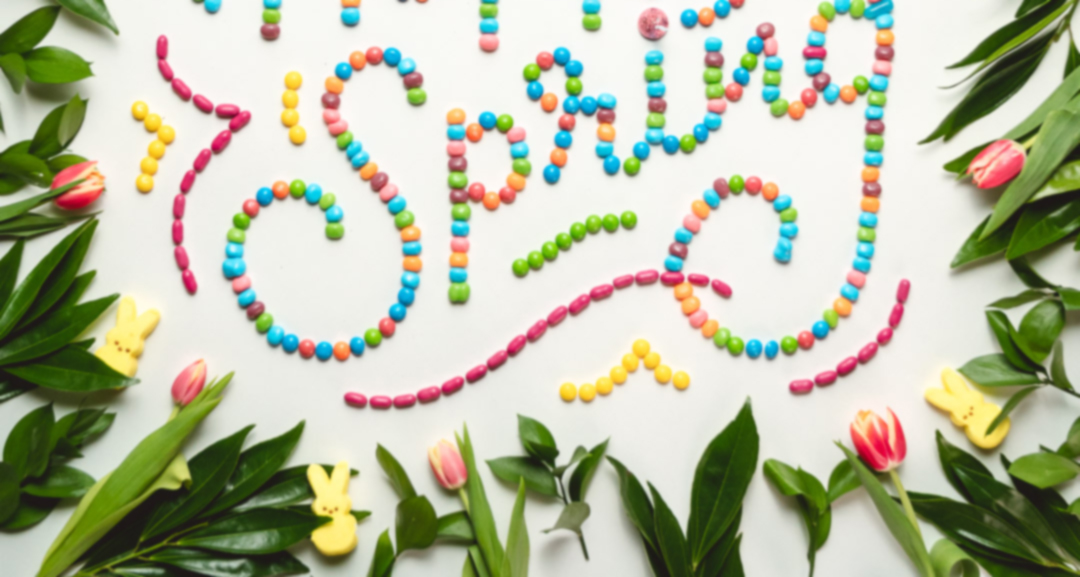 Ever since we built our new studio, we have been interested in experimenting with stop motion content, which is why our design and video teams recently joined forces to produce a proof of concept. After sketching out a few phrase ideas, we settled on “Hoppy Spring” since Easter was right around the corner.

Step One
Brainstorm what types of objects would work best to create the letterforms, but also have a dualed emphasis on Spring

Step Three
Get to work

Using an enlarged version of our planning sketch, we created a rough stencil of the composition to sit on the flat layout backdrop and then began piecing everything together with the candy. Skittles, Jelly Beans, and Good & Plenty ended up as the main players in our composition. After the flowers were arranged around the border, we were able to check how it looked from above using the iPad and corrected anything that had shifted out of place. We planned out how many frames each large movement would take and followed that road map. Working backward, we started with the full composition and shifted or removed objects little by little between each camera shot until the last jelly bean disappeared.

From a technical standpoint, this project required a little patience and consistent lighting. The effect has the biggest impact if each shot matches perfectly. That way the viewer’s eyes are drawn to the objects rather than changes in composition or lighting and the illusion of movement present. We used our powerful Aperture 300d spotlight through a 6×6 diffusion sheet to create a soft daylight environment to help achieve this effect. Next, we attached our camera to a C-stand so that we could get a top-down view of the composition. The camera was digitally tethered to an iPad via wifi, which allowed for wireless control of the shutter while the camera remained above the display and out of reach.

Moving forward we would love to incorporate different camera angles like close-ups and additional b-roll to go with the wider overhead view. This we can showcase different elements of the production in greater detail.

We’re eager to help you get creative with your content.

How can we help?

Art of the Seal

Every day, it seems like another household name is going through a comprehensive rebrand. Which got us thinking … Here we sit, just outside of D.C. and consequently hundreds of government departments – with their own trademark emblems. When’s the last time these agencies got a facelift? Do their “brands” still resonate? Allegedly, there are 430 departments, agencies, and sub-agencies in the federal government. However, that number can’t be considered official. What can be is the overwhelming number of seals we are bombarded with by government agencies and departments on a daily basis. Podiums, dais, memos, websites, even uniforms are […]